Spice Up Your Life... 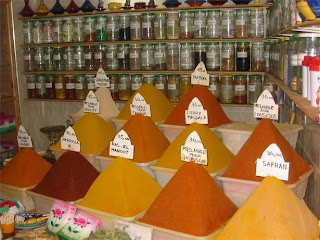 Allspice: A single spice that imparts the warm flavor and rich aroma of cinnamon, cloves and nutmeg, allspice is also known in Mediterranean cooking as myrtle pepper. (It's a member of the myrtle family.) You'll find it whole and ground in recipes for seafood, poultry and meat marinades, as well as in rice dishes and desserts -- like cakes, pies, and puddings. It's also often used in tandem with other spices, especially on vegetables and in stews and stuffings.

Anise Seed: The warm, sweet, licorice-like taste of anise seed is used to flavor both sweet and savory dishes. In Mediterranean cooking you'll find it in seafood recipes, dried fruit and nut mixtures, breads (like biscotti), and desserts.

Basil: A staple in southern France and Italy, you'll find the sweet yet peppery taste of basil in a wide variety of dishes -- as the basis for pesto and often in tandem with tomatoes, in pasta sauces, Italian minestrone, salads and dressings, breads and marinades. It's an extremely versatile herb from the mint family. Basil blends well with other herbs and spices -- such as parsley, rosemary, oregano, thyme, sage, and saffron.

Bay Leaves: Bay originates in the Mediterranean area, where in ancient times it was a symbol of achievement. Potently flavored, just a leaf or two of bay will usually suffice in soups, broths, stews, sauces and marinades for meats and poultry. It's even found in an occasional dessert.

Caraway Seeds, Black: The peppery taste of black caraway (nigella seed) is enjoyed on flat breads and with lentils and vegetables and in spice blends and pickles. No relation to true caraway seeds, these are produced by a flower that belongs to the buttercup family and is indigenous to the Mediterranean. The seed has long been valued for its healing properties.

Cardamom: Mediterranean cooks crush the pods to release the warm flavor and aroma of this spicy, sharp, and sweet seasoning. Native to India and a member of the ginger family, it's used in both sweet and savory recipes -- from beverages and delicate desserts to meat and vegetable dishes.

Chervil: Chervil is used by French and Spanish cooks much like parsley, though it imparts a delicate anise taste as well as an herbal one. You'll find its distinctive, delicate flavoring in recipes for seafood, pasta, grain, vegetable and egg dishes, and in salads, sauces, soups, and dressings. A key ingredient in French potato soups, chervil also appears in blends like Fines Herbs.

Chili peppers: Red chili peppers are ground and used as a table condiment (cayenne) or made into a paste. Mediterranean cooks also sprinkle them in sauces, stews, and seafood dishes. The heat of the spice comes from the capsaicin content, which varies; all chili peppers belong to the genus capsicum, which includes over 20 different species.

Chives: Chives belong to the onion family but have a milder, more delicate flavor than onions. They are rich in vitamins A and C and complement salads and dressings, yogurt, egg, and pasta dishes, casseroles, baked potatoes, soups and sauces. Chives also appear in recipes for Fines Herbs blends.

Cilantro: A strongly aromatic seasoning found in many cuisines around the world, cilantro has roots in both Southern Europe and the Middle/Far East. The leaf of the coriander plant, it has a pungent flavor reminiscent of sage and lemon. You'll find it seasoning Mediterranean stews, soups, curries, vegetables, salads, relishes and tomato-based sauces.

Cinnamon: Fragrant with a slightly sweet taste, cinnamon adds a warm spiciness to Mediterranean soups, condiments, glazes, desserts, and drinks. It complements fruits like apricots and apples as well as meats and vegetables like carrots, spinach, and onions. Cinnamon often appears in Mediterranean cuisine in combination with other warm spices, like cloves, nutmeg, cardamom, ginger, allspice and pepper.

Cloves: The warm, rich, spicy flavor and strong, sweet aroma of cloves is used to accent Mediterranean baked goods, stews, soups, and meats. It's often used in tandem with cinnamon, ginger, and nutmeg. Of Southeast Asian origin, the spice is the unopened flower bud of the evergreen clove tree.

Coriander: With a taste and aroma that's distinct from fresh cilantro leaves (which come from the same plant), coriander is often used to flavor Mediterranean meat, poultry, and vegetable dishes as well as cookies and cakes. Its scent is a bit like orange, its taste warm and sweet.

Cumin: Cumin is a vital spice around the world. Mediterranean cooks toast the seeds whole and then grind them for use in stews and with couscous. It's often paired with coriander as well as hot spices. Good quality cumin will hold its flavor and aroma in long-simmering dishes. You'll find it in recipes for seafood, egg, poultry and meats, as well as tomato-based sauces and salad dressings.

Fenugreek: The nutty, spicy-sweet, maple-like flavor of fenugreek is found in both Mediterranean and West Asian cuisine. It's often used -- whole or ground -- in curries, pickles, breads, teas, and desserts. Use it sparingly, because too much can make a dish bitter.

Garlic: A mainstay in Mediterranean cuisine, garlic is a versatile seasoning that complements most any savory dish. Of central Asian origin, it's a member of the lily family and comes in many varieties, including white-, pink- and purple-skinned cloves. You'll find garlic in Mediterranean sauces, stews, soups, salad dressings, casseroles, breads, and grain dishes.

Ginger: Mediterranean cooks use ginger to enhance both sweet and savory dishes. Warm and spicy sweet, aromatic and zingy, ginger is added to stir fries, sauces, cakes and cookies, puddings, and -- because it combines well with many other seasonings -- spice blends.

Juniper Berries: The fruit of a small evergreen shrub, this aromatic and spicy/sweet seasoning is used for meats (marinades, roasts, stews, and in sausage mixes), pickles, soups, and vegetable dishes. Mediterranean cooks crush the berries to fully release the flavor.

Mace: This red, lacy covering of the nutmeg fruit is used in dessert and savory dishes to impart a warm, sweet, cinnamon/pepper flavor. You'll find it in Mediterranean recipes for soups, sauces, stuffings, puddings, and baked goods.

Marjoram: A relative of oregano with a lighter, more delicate flavor, marjoram is used liberally by Italian, French, and Greek cooks. Native to the Mediterranean region, it has a sweet, minty flavor that works well with many vegetables, meats and poultry and in recipes for soups, stews, butters, sauces, and salad dressings. It's also a key ingredient in spice blends such as Fines Herbs.

Mint: Used in eastern Mediterranean cooking, peppermint and spearmint provide a fresh flavor in a variety of sweet and savory dishes. Peppermint's strong aroma and taste is often used to flavor candy and desserts, and spearmint is often found in teas, sauces, and jellies that are served with meat, as well as vegetables, like potatoes and carrots. Mint is also added to salads, stews, soups and stuffings.

Onion: Onion's distinct taste is indispensable in Mediterranean cuisine, where it enhances other vegetables, soups, sauces, seafood and meat dishes, grains and legumes. There are hundreds of varieties -- including the large, round Spanish onion, the red-skinned Italian onion, smaller, yellow or white onions, pearl onions and green onions --  all of which vary in appearance and potency.

Oregano: Oregano grows wild throughout the Mediterranean, where it's a cooking staple. Though related to marjoram, its flavor is stronger. You'll find it in French, Greek and Italian dishes, especially in tomato-based recipes. Mediterranean oregano is also used to marinate meats and seafood before grilling and to season olives, cheeses, vegetables (especially eggplant), egg dishes, grains, breads, casseroles, meats, poultry, and salads. It partners well with other spices, like basil, garlic, thyme, and parsley.

Paprika: This vibrantly colored spice has a mildly peppery/sweet taste that complements eggs, poultry, stews, soups, dressings, seafood, and vegetables. It can be substituted for Aleppo pepper (use three parts ground Hungarian paprika and one part ground red pepper flakes) in Mediterranean recipes.

Parsley: Native to Southern Europe, parsley is used in sauces, soups, meat marinades, dressings, salads, casseroles, stuffings, omelets, soft cheeses, and potato dishes. The two main types are curly and flat-leaf parsley, both rich in vitamins and minerals. Parsley is a key ingredient in persillade (a French mixture of garlic and parsley).

Pepper: A wide variety of peppers are used in Mediterranean cooking -- usually freshly ground. The black variety originates from unripe green berries that ferment before drying, resulting in strong flavor and aroma. White pepper originates from ripe berries soaked to remove the red skin; it has a bit less aroma and flavor and is best used in recipes requiring a milder pepper flavor and white color, such as light soups, white sauces and egg dishes.

Rosemary: A native Mediterranean spice, rosemary's aromatic, needle-like leaf has a sweet, pungent flavor. Italian cooks use it liberally in marinades and with roasted and grilled foods, like vegetables, poultry, and seafood. It also works well in stews, sauces, dressings and focaccia. You'll find rosemary in Bouquet Garni and Herbes de Provence blends, too.

Sage: A Mediterranean spice in the mint family, sage has a pungent, slightly bitter/sweet taste and an herbal fragrance. Mediterranean cooks use it to flavor a variety of foods, including meats, seafood, poultry, stuffings, soups, breads, bean salads and dressings. Italian cooks add it to pasta sauces, too.

Sea Salt: The fresh, robust taste of sea salt is found in Mediterranean breads, pickled vegetables, dressings, and with cheeses, meats and grains -- any savory dish and a few sweet ones as well. It enhances other flavors, seasons on its own, and provides a necessary nutrient.

Thyme: Native to the Mediterranean, this aromatic, pungent seasoning has an herbal, minty flavor and scent. It's used in many savory recipes and especially with tomatoes and in slow-cooked dishes like soups and sauces. Try it (with a light hand at first) with poultry, seafood, meats, and in marinades and stuffings. It's distinctive enough to stand on its own, but it's also found in classic spice blends like Bouquet Garni and Herbes de Provence.

Turmeric: Mediterranean cooks use turmeric to add a beautiful yellow color, warm, mild aroma, and gingery spice to many recipes, including egg, grain, vegetable, legume, seafood and meat dishes, as well as condiments. It's a member of the ginger family and is sometimes used for color in place of the more expensive saffron (though the taste is distinctly different). 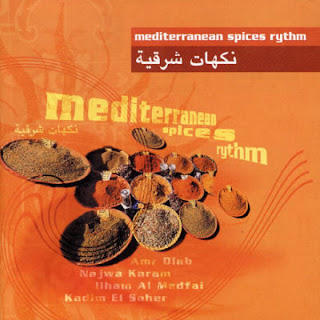 Make love - not war
still true today
and always will be
anything else is blasphemy
:  )
Posted by Miguel at 8:08 AM