.
...born in Luanda in 1935, Maria de Lourdes dos Santos Van-Dunem started her musical career in the 60s when she joined the "Ngola Ritmos" band along with Liceu Vieira Dias, Jose de Fontes Pereira, Amadeu Amorim and Belita Palma, the forerunners of Angolan music, who were also in the anti- colonial movement.
After producing "Ngola Ritmos", the singer made several tours in Angola as well as in Portugal before recording her first album "Monami". 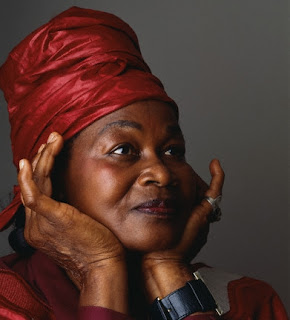 She later worked with the "Jovens do Prenda" band.
During her musical career, Lourdes Van-Dunem had also performed in Brazil, South Africa, Algeria, France, Spain and Zimbabwe.
In 1996, the vocalist, who was a florist, recorded her compact disc "Ser Mulher" in Portugal.
She had also participated in the "So Why" project initiated by the International Red Cross Committee (ICRC) together with Senegalese Youssou N'dour of Senegal, Congo's Papa Wemba, Nigerian Lagbaja and Lucky Dube and Jabu Khanyile of South Africa.
This culminated into the recording of a CD, a video clip, a documentary and the publication of a book aimed at helping the victims of war and political violence.
She died in 2006 of typhoid fever. The President of Angola, Jose Eduardo dos Santos, attended her funeral.