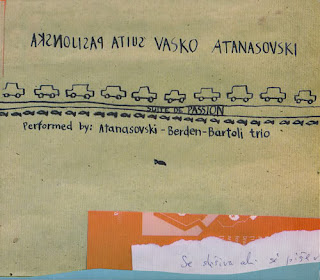 Saxophonist and flutist Vasko Atanasovski is one of the most creative and versatile Slovenian composers and musicians, well known for his cross-genre collaborations with world famous jazz, rock, classical, traditional musicians and his masterful approach to all styles of music. Up to this date he has released 10 highly acclaimed albums, received numerous awards as well as earned audience and critics’ compliments for his performances and compositions home and abroad. He is a regular guest on the European festival and concert circuit and has also performed in India, China and New York. His original compositions have also found a way into the world of theatre, dance and puppet shows, repertoires of eminent soloists, orchestras, ensembles and choirs. oficial


Passion to play
thegoodone to say 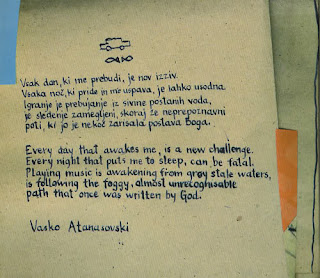 from linear notes: Vasko Atanasovski (born 1977 in Maribor) is one of the few Slovenian musicians who, besides researching contemporary improvised music, Afro-American and European tradition, ethnic music from different parts of the world, succeeded to develop exceptional originality in composition and musical style. Numerous projects, in which he had been researching new 9 concepts of communication, aesthetics and creativity, are behind him. In 1990 he won the r award on the competition of young saxophonists from former Yugoslavia. When he was seventeen, he began to play gipsy music and started to take part in dance and theater projects. In 1996 he joined the legendary Quatebriga jazz ensemble. Ever since he has been devoted to his own productions as a founder of many music groups and projects (Vasko Atanasovski Quartet, Vasko Atanasovski iMPRODooM, Slavika Ensemble, Solo Akupunktura, Atanasovski-Berden-Bartoli Trio). In 2001 he published Akupunktura, a small edition solo album, and in 2002 the album Heat Flower came out at the Austrian record label Extraplatte. Suite de passion brings forth contemporary music, marked with elements of flamenco, jazz and ".ein music. The idea is rooted in existentialism: the existence is a ,,passion in both senses, as md desire. These feelings inspired the conception of Suite de passion, dynamic and passionate v among the excellent improviser Atanasovski, outstanding Italian acoustic bassist Roberto imnd all-round Slovenian pianist Dejan Berden.

Posted by kokolo at 1:29 PM No comments: