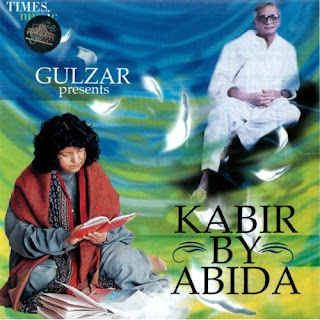 " They say one should not have one ’nasha’(intoxicant) over another. Here, you have Kabir, the ultimate philosopher, poet whose timeless verses have been given voice by the reining queen of sufi music, Abida Parween.

One nasha over another.

Well this is the way Gulzar in his inimitable style , has introduced this gem of an album.
You will find millions who may be able to recite dohas of kabir, but very few who can understand the deep philosophy underneath them. No other poet has sung such simple verse with such deep meaning.

For instance the doha "Bura jo dekhana mei chala,bura na milaya koi; jo mann khoja apna to mujhse bura na koi" I have been searching for that "bad one" but I couldnot find him anywhere. Finally when I turned to myself I found there is nobody worse than me. Instead of finding fault with others, look within yourself and you will realise that the solution to all your problems lies within yourself.

Again, "Bada huoto kyua hua,jaise ped khajur panthi ko chaya nahin phal lage atidoor" what good is your so called eminence if you are neither compassionate nor helpful to others? Entire nature teaches you ’giving .’The river doesnt hold on to its water, the tree doesnt hold on to its fruits, the cloud doesn't hold on to the rain. The joy of sharing and giving is much more than that of gathering and collecting for yourself.

This is a collection of priceless gems of Kabir. There is nothing ordinary or mediocre here.

Abida is the most celebrated singer of the Sufi genre of music. She never fails to take her listeners to a musical trance. Her other albums like "Raqs-e-Bismil" have become popular with lovers of serious music.

I believe Abida is one of those rare singers who was personally chosen by the almighty to spread the message of universal love everywhere. When she sings she is in direct communion with god. This rendition of Kabir by Abida paints a musical picture of surreal beauty out of the timeless poetry of Kabir. The sound recording and technical quality of this album by Times music is excellent.

one for the age old discussion, is it the muisc or is it the words, it should be both, I wish the music would have matched the poems, some more passion ... .)
Posted by Miguel at 10:44 AM