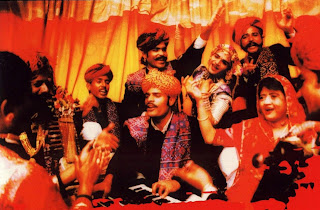 A musician sitting cross-legged on stage plays a fabulous melody with his Jew's-harp, accompanied by the rhythm of the dholak, welcoming the pilgrims, who are Musafir, travellers since centuries all over the Rajasthan. They are on pilgrimage to Baba Ramdev's temple, the great Saint of Gypsies. The Saints are worshipped by both Hindus and Muslims, yet their interpretations are very personal. The Sapera, known as the snake charmers, belong to the most ancient Gypsy tradition.
Hameed Khan's father and forefathers were musicians, exponents of both folk and classical Indian music. In 1984, Hameed, a tabla player in the University of Rajasthan, decided to settle in France. He proved his versatility and played with Indian classical artists, folk dancers and European musicians including Lo'Jo, the Breton singer Erik Marchand, and the Gipsy Kings' Chico Bouchikhi.
In 1995 he started Musafir with a goal to introduce the full spectrum of Rajasthani styles, including qawwali singing, Bollywood songs, Arabian influenced pop, and Hindustani classical music. His aim was to show music within its context, including the rich visuals. Indians don't have boundaries between art disciplines, the Hindu word sangeet means simultaneously music, dance and drama.
Musafir is a colourful mix of performers coming from all corners of the Thar desert in the North West Rajasthan: the sedentary Langas and Manghanyar and nomadic Sapera. The Sapera (from the word Sap, snake) specialize in curing snake bites and in snake charming. source 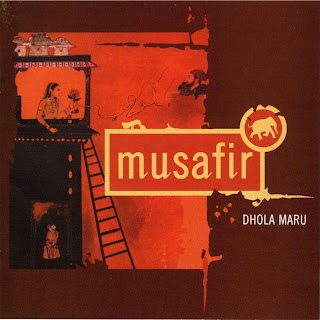 Dhola Maru
Don't let the explosion of sounds and colors just pass by breathe them in, thegoodone is all around.

A Whirlwind of Ecstatic Music from Rajasthan - In the windswept desert of northwestern India, at the edge of the Islamic Orient, the Gypsies, Muslims, and Hindus of Rajasthan have coexisted for over ten centuries, giving rise to a sacred music tradition at once sensual and holy. On Dhola Maru, Musafir unleashes a whirlwind of masterful rhythms and spiraling polyphonies transporting us into the ethereal landscape of Rajasthan’s gods and maharajas, saints and lovers. This world-class gathering of musicians brings alive three sacred music traditions at their highest level – electrifying Muslim qawwali chant, North Indian raga, and passionate songs from the dawn of Gypsy culture – drawing us "through the trance and irresistibly into the heart of divine ecstasy." source 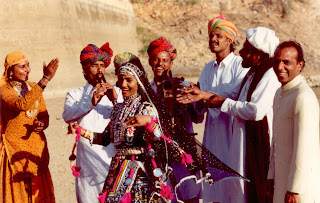 Rajasthan, in northwestern India, has a unique mix of cultures that has continually enriched not only its own music, but that of much of Asia and Europe over the centuries. Gypsies, Muslims, and Hindus have all contributed to a potent blend of sounds and influences that have grown into a ceremonial music of rare sensuality. Musafir's members reflect this fusion of religions and cultures and by working together have generated a new energy that is all of the above and none. If you know the various sources, you can identify the complex ragas, the ecstatic qawalli voices, the incessant swirl of the Sufi, and the physicality of Gypsy songs, but they are merged into a new sound in the hands of these musicians, singers, and dancers. The nine tracks include mesmerizing love songs, frantic dance tunes, powerful ensemble and imploring solo vocals, accompanied by harmonium, dholak, sarangi, and a host of other instruments that represent the region's diversity. Musafir are uniquely equipped to translate these many cultures into an important cooperative of sound. --Louis Gibson source
Posted by kokolo at 1:39 PM