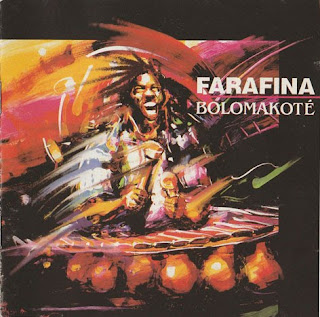 1. Moroman Wouele
Nobody has called me" Song about Man's destiny, reminding him that destiny is the path on which he is getting on.
2. Bolomakoté Mama
The musicians thank their country, their town and its very special quarter which is the Bolomakote, as well as their leader Mahama Konate that all have contributed to their happiness and opened their eyes and heart to the world.
The Bolomakote is the main-quarter of cultural and musical effervescence of Bobo-Dioulasso.
3. Mandela
Song dedicated to Nelson Mandela, inviting every one, and all the people of Africa and of the world to spell out Mandela's name to remember and pursue his struggle.
4. Nianiae Lomina
Once I saw his eyes..." _When I saw his eyes, one night in Paris. I realized: because he left his home too long ago he is now a stranger there, and he will always be one here. tie knew, he was old and he cried. _Never drop and leave your roots, return to them, keep them up..."
5. Kodine
Song inviting everyone to live and to move, reminding to those who like to criticize that doing is more difficult but more important, that immobility and statism are the antechamber of death.
6. Samba
Through the story of Samba the little burglar, this song tells about the difference of satisfaction that is provided when something is obtained thanks to good work versus to when nobody knows how and from where.
7. Patron Mousso [Instrumental]
,Don't touch the masters' wife..." Humoristic sentence that gives some relativity in the notion of fidelity between man and woman. It is an opening to the feast, to unselfconsciousness. It Is a feast to the Instruments, to the men, where they meet, present and confront themself to each other.
8. Goulikanairi Ye
Song dedicated to the quarter of Bolomakote, which literaly means We have no fortune but we like to stay here".
9. Kabouroudibi
,The grave's darknesses" Song dedicated to the universal equality of Men when facing death, to the respect due to each, reminding that in regard of death, we are all equal, and that the darkness of the grave is the same for everybody. Song performed at funerals.

If you are in trouble
and it looks like it want pass
yust call thegoodone
he'll clear the mess
;)