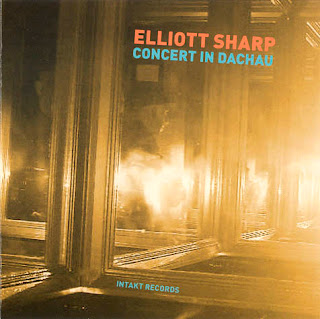 I was quite surprised when I found out from Steffen about the booking in Dachau as this is one of those place-names that have become synonymous with human atrocity. Don Van Vliet (Captain Beefheart) sang it perfectly in his «Dachau Blues.» As the Jewish son of a Holocaust survivor, performing in Dachau was especially resonant. Amplifying those feelings, I first imagined the name of the venue, «Teufelhart,» to be some ironic comment on the innateness of evil in humans. On tour with V-Effect in 1983, we passed by the concentration camp on our way to Regensburg by van. It was late in the afternoon on a cold rainy day and the grayness of the light blended with the grayness of the camp buildings to create an iconic image of bleakness.

For this concert, Axel from the Jazzclub Dachau picked me up in Munich and we drove to the village where we sat outside the cafe and enjoyed the sunshine, pastry and good espresso. He filled me in on some of the history of the village: before Hitler, it had long been known as an artistic community, a center for painters and musicians. It is very much that way now with galleries and restaurants. One can’t but help imagining a summer afternoon in 1941 or 1942, artists enjoying a kaffeeklatsch while nearby, the horror unfolded.

Despite the weight of the Holocaust, I’m angered in the way that contemporary Jewry acts as if they own all to themselves all of the suffering of WW2, all of the extermination, all of the death, and that it gives them license to do any brutality to the Palestinians who just happened to be living (some for thousands of years) in «their» Promised Land. For those who justify this with «God’s Covenant with Abraham,» it must be pointed out that the Covenant was for Abraham and ALL of his descendents which most certainly includes the Muslim world as they regard Abraham as their founding patriarch.

Returning to Dachau, we can’t forget that Hitler’s first victims there were the mentally ill, Communists and Socialists, homosexuals. What defines a Holocaust? Is it sheer numbers? A «capital H»? Why are there not international memorials for the vast millions of Chinese executed or dead of starvation during the Cultural Revolution? Stalin’s tens of millions? The Khmer Rouge? The Hutus and Tutsis? Darfur? How many hundreds of thousands of innocent citizens of Iraq killed as a result of the illegal and immoral American attack and occupation will it take for that absurd misadventure to be recognized as an atrocity? As my friends and I often say to each other once the discussion heats up, «let’s not get started.»

The Cafe Teufelheart is run by Mrs. Teufelheart – kindly and a lover of art and music. The club has a great kitchen and the performance space seems small but can pack in a good number of people at tables on the floorspace or up in the balcony in seats. I performed two sets which were recorded by Jan. One might call the music a live remix of my various solo programs for electro-acoustic guitar. Some of the themes are well-documented on the solo CD’s «Velocity of Hue» and «Quadrature» – others, unnamed, appear suddenly and then disappear after revealing their nature.

Vocabulary is arguably the key ingredient in any entirely solo performance on any instrument other than the piano. Concert In Dachau is, perhaps, the best realized music Electroacoustic guitarist Elliott Sharp has ever committed to record. It's rare to get the chance to take in a musician's very thought processes as is possible here, and a by-product is Sharp's vocabulary being is thrown into stark relief. It's to his resounding credit that it's rich, varied and alive with nuance.

Over the course of four lengthy performances, he seems at times to be in a kind of dialogue with the music itself. There's a moment in "Dachau 1" where the sheer level of his engagement evokes a Terry Riley-like minimalism, but the sense is usurped in the face of the volume of Sharp's ideas and their degrees of resonance. He seems acutely appreciative, at such moments, of Derek Bailey's "in the moment" approach to solo guitar, the knowledge seeming to fuel his own creativity, and acting as a kind of spur to his playing.

In the opening passages of "Dachau 2," Sharp is preoccupied with the guitar's augmented vocabulary. Both strings and the ways in which they are to be manipulated result in music that could just as easily be the product of a duo as opposed to a solo performance. Here Sharp shows himself to be a player of finesse; it's that quality, however, which informs the changes the piece undergoes.

"Dachau 3" finds him more preoccupied with the nature of the electric properties of the guitar, in a manner that, more than anything else, here shows how alert he is to the potential it has to offer. A reflective air sometimes pervades, but such is Sharp's appreciation of musical construction that he never seems to lose sight of where the music is going. In that respect, at least, Sharp is taking his music to new places. The whole program is in essence a manifesto for restless creativity, even while on "Dachau Encore" Sharp evokes the spirit of Blind Willie Johnson with his dexterous slide playing.

In the opening passages of "Dachau 2," Sharp is preoccupied with the guitar's augmented vocabulary. Both strings and the ways in which they are to be manipulated result in music that could just as easily be the product of a duo as opposed to a solo performance. Here Sharp shows himself to be a player of finesse; it's that quality, however, which informs the changes the piece undergoes. 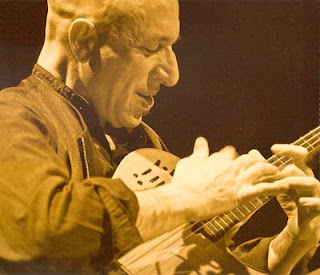