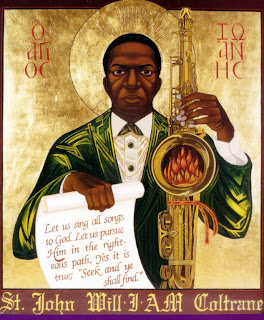 "My music is the spiritual expression of what I am --- my faith, my knowledge, my being" - John Coltrane

...In 1957, Coltrane suddenly went through what he explained as "An experience, by the grace of God, a spiritual awakening which was to lead me to a richer, fuller, more productive life." He once again dedicated his life to God and the spiritual, but not necessarily the Islamic method. Coltrane believed in what is described as a "cosmic mysticism," (Kofsky) though he generally considered himself to be a Christian. He found his own music to be thoroughly spiritual in nature, and his experience with God to be exclusively personal. He became interested in Eastern philosophy and music as a solution to his intense need for self-expression, and discovered Hinduism, the Yoruba Religion of West Africa, Buddhism and others in his search for understanding and meaning (Horst). While the musical styles these religions embodied did not pervade Coltrane's work after he discovered them, he fashioned his philosophy of the world from them. Later he absorbed the foundations of their music into his own. Trane began writing pieces with Indian undertones, such as 1961's "India." His work absorbed Eastern musical ideas, and moved in avenues previously unexplored.
Spiritual tones and Eastern ideas were later used in Coltrane's piece "Alabama", about the Sunday morning bombing of a Birmingham church in 1963 (Strickland). During this time of Black Nationalism, Coltrane's music was propelled by avant-garde ideas, but Coltrane himself remained a pacifist despite militant upwelling within the black community. This was most likely due to his close personal relation to his God and newfound Eastern philosophy. While he did not want to fight, he did however want:

to be a force for real good. In other words, I know that there are bad forces,
forces out here that bring suffering to others and misery to the world, but I
want to be the opposite, I want to be a force which is truly for good (Kofsky).