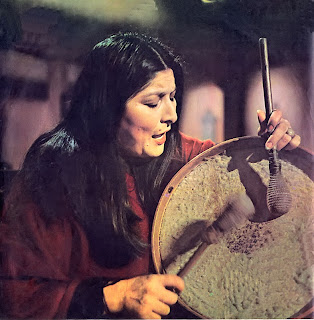 Mercedes Sosa, who has died aged 74, was the most renowned Latin-American singer of her generation; she was known as "La Negra" for her long, jet-black hair, and as "the voice of the voiceless ones", for her performances of songs which championed the rights of the poor.
Though not known as a songwriter, she was an unrivalled interpreter of works by her compatriot, the Argentinian Atahualpa Yupanqui, and Chile's Violeta Parra, both icons of the region's nueva canción movement towards the end of the 1960s, whose work often spoke of the struggle for human rights and democracy.
As a figurehead of the Left in her own right, Mercedes Sosa fell foul of the military junta that ruled her nation between 1976 and 1983 and conducted the notorious "Dirty War" against its own people. It was during this time that she had to live in exile, even though, as she once declared: "An artist isn't political in the party political sense – they have a constituency, which is their public – it is the poetry that matters most of all."
In spite of this, her choice of material demonstrated a shrewd ability to encapsulate popular consensus on the Left, and she sang definitive versions of many songs, including Parra's classic Gracias a la Vida and Horacio Guarany's Si Se Calla El Cantor (If the singer is silenced).
In a career spanning nearly six decades, which saw her popularity survive passing trends, she released 70 albums. Although these were often based in the Argentinian folkloric styles with which she first achieved success, she was notable for her extraordinary versatility. Her repertoire also included Argentinian tango, Cuban nueva trova, Brazilian bossa nova, rock and even liturgical music – with Ariel Ramirez's Misa Criolla, in 2000. From 1967 onwards she toured internationally, and subsequently collaborated with a huge array of artists, including Luciano Pavarotti, Sting, Nana Mouskouri, Joan Baez, Pablo Milanés, Caetano Veloso, and Shakira.
Pounding on her trademark bombo drum, acting her songs out with expressive gestures and singing in a rich contralto voice that effortlessly conveyed a strong moral authority, she was a familiar figure on the world's stages.
One of her most memorable UK appearances was at London's Royal Festival Hall in October 1999, shortly after the infamous detention in Britain of Chilean dictator General Augusto Pinochet.
"I cannot believe I am in London singing these songs, with Pinochet under house arrest," she cried, before launching into an emotional rendition of Todo Cambia (Everything Changes) another nueva canción standard which had long been part of her repertoire. She recorded the song several times, most recently in a stripped-down version for her 2005 comeback album Corazón Libre.
Haydee Mercedes Sosa was born on July 9 1935 in San Miguel de Tucumán in Argentina's Northwest, to a working class family with French and Amerindian (Quechuan) roots. She grew up with a keen appreciation of the local folk dances, such as the zamba and chacarera, and while still only fifteen won a talent contest organised by a local radio station. The prize was a two-month contract to perform on air for the station, and it effectively launched her singing career.
By 1959, she was an established voice and had recorded her first album, La Voz de la Zafra. In 1965, she appeared at Argentina's National Folklore Festival in Cosquin, which led to domestic acclaim. Within two years, she had achieved international success with her first tour of the US and Europe and after this she increasingly broadened her repertoire to include songs from all over Latin America.
By the late 1960s, she was becoming identified with the emerging nueva canción movement, an idealistic attempt to achieve political and social change through music. But then the political climate became increasingly conservative throughout Latin America, with Pinochet seizing power in a coup in Chile in 1973 and Argentina following suit in 1976, when Jorge Videla's military junta came to power.
Thereafter, Mercedes Sosa became the object of state surveillance and intimidation by the "Triple A" death squad. At a concert in La Plata in 1979, she and her entire audience of 200 university students were arrested and detained. Although she was released as a result of international condemnation, the incident forced her into exile, leaving with just "three suitcases and a handbag". She found life in exile tough, living first in Paris and then Madrid, but her music became a rallying point for those back in Argentina who had themselves been silenced.
With the Argentinian junta's power waning however, Mercedes Sosa returned home in 1982 shortly before the debacle of the Falkland's War, giving a triumphant series of concerts at Buenos Aires' Teatro Colón. These were immortalised on the double album Mercedes Sosa en Argentina, which sold particularly well and cemented her status as a legend of the musical genre.
She continued her international tours and collaborations, initially by working with Charly Garcia in the rock nacional movement, which challenged the regime. Collaborations with the folk singers Victor Heredia and León Gieco followed, as well as Brazil's Milton Nascimento.
Mercedes Sosa battled ill-health during the 1990s, but made a comeback in 1998 with a series of concerts staged in Buenos Aires' Luna Park. She later endured a two years hiatus after a series of falls, although she returned to performance in 2005.
In her later career, she became a UNESCO goodwill ambassador, and during the last decade received her greatest accolades. These included Latin Grammys for Best Folk Album for Misa Criolla (2000), Acústico (2003) and Corazón Libre (2006). Additionally, her song Balderamma was featured in the movie Che (2008). Her latest album Cantora 1 has been nominated for three Latin Grammys in the forthcoming awards.
Her last UK appearance was in London on July 15 2008. Although obviously in poor health and unable to stand onstage, she was still in fine voice.
Haydee Mercedes Sosa, who died on 4 October, 2009, was married twice. Both husbands predeceased her. She is survived by a son from her first marriage. source 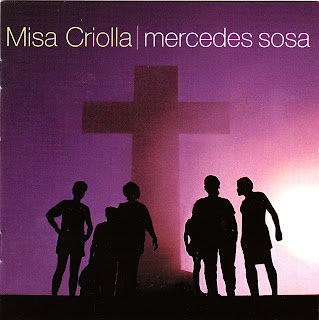 Pass this one and you will miss thegoodone.


Pope John XXIII had summoned a Vatican Council in 1962, the principle concern being the need for a manner of worship that included all worshippers. The Council ordered that the official language of the western Rites of the Catholic Church be changed from latin to the vernacular. A call went out to composers to create new music for worship in the languages of the people.
Ten years earlier Ramirez has wanted to write a mass in folkloric idiom, but clerics had advised him that a mass sung in Spanish was not permissible. When the Vatican Council refuted the longstanding sole legitimacy of Latin, Ramirez had already written most of the Misa Criolla. He quickly enlisted the help of the Liturgical Advisor to Latin America, Padre Catena, to finesse the text, and the director of the Choir of the Basilica del Socorro in Santiago, Padre Segade, to craft choral parts.

Ramirez, An Argentinean himself, did not simply set a text in Spanish: he infused his Misa with Hispano-American flavor, using traditional melodies, rhythms, harmonies, and instrumentation.

The Kyrie ("Lord, have mercy upon us") captures the vast solitude and aridity of the plateaux of the Andes. Two Andean songs, vidala and baguala, are combined. Vidala, a song of Argentine Indians, has two voices in parallel thirds, accompanied by drums and guitar. The baguala's rhythm pattern is long, short-short.

The Gloria ("Glory to God in the highest, and peace to all people on earth") is in three sections with an introduction. A plaintive and haunting instrumental call, the yaravi, opens the movement. This breaks into the first carnavalito, a joyful, catchy duple-meter dance found collectively in north-west Argentina, Bolivia, and Peru. A reprise of the soulful yaravi heard in the introduction is now given to the choir and soloists as a recitative, asking for the forgivemess of sins. The festive, carnival scene returns with even more ebullience than the first.

The Credo ("God almighty who made heaven and earth"), the confession of belief in Jesus Christ is underscored by the chacarera trunca, in which duple rhythms interlock with triples in the percussion and alternate between measures in the voice parts, setting up a heightened excitement.

The Sanctus ("Holy, holy, holy") is fuelled by the tension of the cochabambino: again, two rhythms butt against each other: one a defiant short, long; the other a more loping long, short, long. At times as many as seven different rhythms are played simultaneously.

The Agnus Dei ("Lamb of God") is a pampa: reverential and tender, it nobly beseeches peace and brings to a close a work that has run the gamut from earthy exuberance to innermost spiritual yearning.

Ironically and magnificently, this music, so rooted in a specific regional folklore, has profound resonance that is both personal and universal. Source


Navidad Nuestra is a folk drama of the nativity of Jesus Christ in the rhythms and traditions of Hispanic America. Ramírez, a native of Argentina, also used this style in his popular Missa Criolla which was performed by The Naperville Chorus in December of 1994.

In this composition Ramírez gave to each episode of the story of the Nativity a distinctive regional voice which captures the mystery and glory of the birth of Christ in the musical idiom of the Composer's background. For example, a chamame for the annunciation to Mary and a huella pampeana for Mary and Joseph's pilgrimage to Bethlemen. The result is a creation of beautiful, and inspirational musical scenes .

Poet Felix Luna provided the lyrics for Navidad Nuestra. The collaboration of Ramírez and Luna has produced a marvelous work featuring Hispanic American characteristics and the universal appeal of the story.

The poetic translation in the music was quite free. The orignal Spanish poetry of Félix Luna also includes in the guaraní language - used by the Indian tribe that originally inhabited Paraguay and the provinces of Corrientes and Entre Ríos in northeastern Argentina. We thus give only a paraphrase of the movements. Source