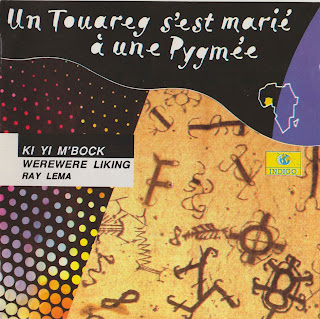 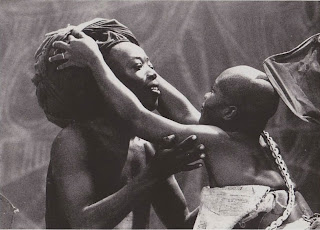 Werewere Liking has earned the attention of much of the francophone world over the past seven or eight years for her novels and plays. A prolific and multifaceted artist, she also writes poetry, studies and practices traditional art forms (sculpture, Malian marionette performances), paints, produces and directs and acts in her plays, and has produced severalshort films. Growing up among the Bassa of Cameroon, Liking experienced her people's rituals of healing, initiation, and death, and it is this framework which serves as a theoretical base for her writings and personal philosophy. She belongs to a new generation of African writers who are concerned as much with the content of their works as with developing a new African esthetic that might further the social efficacy of their art. Unlike modern African theater in the decades after Independence (largely imitating a European esthetic), Liking's theater combines dance, music, song, speech, and traditional spatial arrangements and concentrates on eliciting an emotional response to engender an intellectual one. In many respects, hers is the "total theater" that Artaud envisioned.

Politically, economically, and socially, Africa's leaders have defaulted on their promises, declared goals, and responsibilities. They have also been instrumental in advancing dependency and promoting an unhealthy social imbalance between desire and self-indulgence and between the abuse of traditional beliefs and modern opportunism. Correspondingly, one of the most wide-reaching thematic springboards in the post-1970 francophone African literatures has been the conflict between traditionalism and modernism. This tendency emerges in the 1980s with what seems to be a new emphasis: the thematics of the assistés or (foreign) aid recipients.
Indeed, for some contemporary authors, the means of dealing with the negative forces "directing" African society lies not just in integrating traditionalism with modernism, but in combatting the facile excuses which keep Africa in a state of eternal alienation and dependence on borrowed principles. This is the point of departure for the following discussion of Werewere Liking's theater, a discussion which privileges her most recently published text, Un Touareg s'est marié à une Pygmée ( 1992 ) Launched in the late 1970s, the theater of Werewere Liking, while presenting the sociopolitical and spiritual trials of contemporary Africa, is one that attempts to go beyond presentation, protest, and criticism with the purpose of forging a new vision of the African world and the self as well as a collective dream that might enable the meeting of the possible with the seemingly impossible, the "marriage of stone with water" ( Touareg, 34). In this theater, it is a question not just of recovering a certain balance in life, but of the process through which freedom and a fullness of being can be accomplished in a contemporary sociopolitical environment dominated by fear, demagogy, and estrangement. This process is enabled first and foremost by the notion of rencontre: an encounter of history with myth, the past with the present, tradition with modernism, and the self with its conscience and with "the other." As Ngolobanza, the Pygmy bride, states: "Tout est une question de rencontre / Une question d'ouverture, de vision / Accepter de s'approcher, de se rapprocher / On ne connaît la différence que par l'expérience" (It's all a question of contact / A question of openness, of vision / Agreeing to draw closer, to come together / We recognize difference only through experience; Touareg, 35). In the final analysis, rencontre forms a philosophical imperative in the search for a healthy equilibrium between traditionalism and modernism.
It is the thematic and structural gateway that might open the doors to the wider perspective and in formed judgment that support the very raison d'être for Werewere Liking's theater.

Liking's theater is rooted in the premise that contemporary African drama should confront contemporary problems (and propose solutions) in Africa in a form that is based on African symbols, structures, philosophies, and performance techniques rather than on Western conventions. This premise is based on an esthetic need that is itself conditioned by a social need. For not only, as Hourantier says, does "imported theater obey a ritual whose code the African does not know and to which he does not react emotionally" ( Du Rituel au théâtre-rituel, 8) but many traditional beliefs, rituals, and the myths that lie at their inception no longer relate contemporary Africa to its former dynamic.2 Indeed, if these myths and rituals do still remain in collective memory, they have often been exploited nefariously or emptied of their meaning and efficacy.
source