One more for a Saint Called Louis 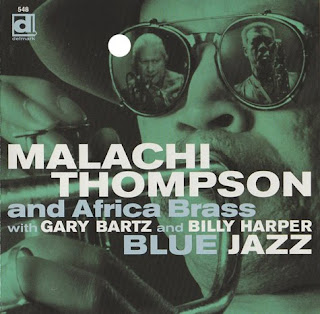 Trumpeter, composer, arranger, and bandleader Malachi Thompson has outdone himself with Blue Jazz. Being the fourth Africa Brass date, Thompson and his notion of reinventing the manner in which a brass-driven big band explores the relationships between harmony and rhythm, and the more tenacious linguistic commonalities between bebop and free jazz have never been as articulately or gracefully rendered as they are in this pair of suites. The band is stellar, among the five-trumpet, four-trombone saxophone giants Gary Bartz and Billy Harper, with Chicago greats Ari Brown and Gene Barge on a cut each. The rhythm section featuring pianist Kirk Brown, bassist Harrison Bankhead, and drummer Leon Joyce Jr. is second to none. In addition, vocalists Dee Alexander and the Big DooWopper help out with one track each. The two suites, "Black Metropolis" and "Blues for a Saint Called Louis," are stunning compositions in and of themselves. The former, in four sections, runs the gamut of brass interplay on sophisticated urban jazz and blues ŕ la Duke Ellington's early-'60s charts crossed with the Latin rhythmic toughness of Machito and the deep-blue groove arrangements of Oliver Nelson. On the six-part "Blues for a Saint Called Louis," the New Orleans funeral dirge meets the small-group wild styling of jazz's earliest days in Storyville's brothels to King Oliver's large-band stomp to the Hot Seven, striated harmonic workouts to the gut bucket blues as it met the big-city sophistication of New York via Armstrong's 1930s and '40s charts. The spirit is raucous, joyous, and utterly sophisticated; it looks forward and back across 20 years of Thompson's own free bop amalgam, but also through the entirety of jazz history. [The album is, simply put, a singular achievement and one of the great big band records in recent years, and a serious candidate for big band album of 2003.]

To pass or not to pass
don't just run
ask thegoodone.
Posted by kokolo at 3:12 AM