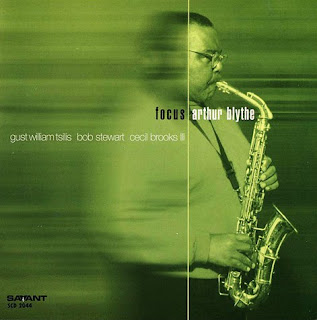 Arthur Blythe has been busy (rewiev is from 2002). He has a new recording, and last month completed a stint with his quartet at the Jazz Standard. Blythe is living in his hometown San Diego again, so NYC jazz fans jumped at the rare opportunity to see him play live. The band - Blythe on alto, John Hicks on piano, Dwayne Dolphin on bass, and Cecil Brooks III on drums - was augmented by longtime Blythe collaborator Bob Stewart on tuba. Blythe's diverse repertoire provided springboards for intriguing soloing and group exchanges. The band "made it look easy" in the plush red velvet surroundings of the Jazz Standard. For those who missed Blythe's live shows, there's a very nice product in record stores now that features the core members of the live band - Blythe, Brooks and Stewart.
Focus sounds like it could have been conceived and recorded by some of the new crop of "downtown" musicians. The spare instrumentation and simple, elegant compositions sound fresh, relevant and forward-looking. But there's also a patina of maturity and self-assuredness that sets Focus apart from rawer, more experimental downtown sounds. That's because the musicians - supported on some tracks by special guest William Tsilis on concert grand marimba - have arrived at their maturity and self-assuredness through decades of experimental efforts. They've spent careers redefining jazz, and the fruits of their labor result in music that is relaxed and understated, yet emotive and powerful.

Drummer Brooks (who also produced the record) is a master of understatement. His impeccable time, thoughtful accompaniment and creative soloing are always tasty and right-on, and bring to mind how the great Art Blakey kicked a small band in the ass. The record's "secret weapon" is Tsilis. He fills a variety of functions - keyboard harmonist, comping colorist and most notably adds an African feel with authentic balafon-like playing. He also gets plenty of solo time, and the results are impressive.

Of course, the record is based around the team of Blythe and Stewart. These two dignified gentlemen, veterans of the ‘70s NYC "loft jazz" scene and countless projects since then, have a musical relationship that goes beyond familiarity. At their best moments, their playing together transcends the music and enters the realm of sound poetry. They can make pure statements. Their interplay - often with Stewart laying down a funky, ostinato bass line under Blythe's spiky, biting alto lines - has been going strong since Lenox Avenue Breakdown. It's now a polished act, and their voices fit like an old shoe.

focus on thegoodone to pass through
Posted by kokolo at 11:23 AM