Malik Mezzadri is a jazz Flautist born in 1969. He grew up in Pointe-à-Pitre, Guadeloupe where he started recorder (fipple flute) and transverse flute at the age of 6. When he was 13 he learnt flute with Marc Rovelas who made him discover Bach, Xenakis, Ravel and Stockhausen.
He left Guadeloupe at 17 and graduated from the Marseille conservatoire being the first flutist, he discovered jazz at that time.
As soon as he left the conservatoire, he got the occasion of playing in reggae band Human Spirit during 10 years.
Malik Mezzadri made multiple collaboration as a flutist with artists such as Lio, Teri Moise, Laurent Garnier, Saint Germain, Dj Gilb’R, FFF.
In 1992 he founded his first Magic Malik Orchestra which recorded its first demo released in 1997 under the name HWI Project via Salam Aleikum.
Then he met Julien Laurau who tours with his own band: the Groove Gang. In 1998 he takes part to the album City Boom Boom and joined the Groove Gang. In 1999 Malik goes on tour with the Groove Gang during several months across South America and Africa.
In 2000 he decides to start an album on his name and gathers  a new Magic Malik Orchestra. It leaded to the recording of the album 69 96 via Label Bleu:
............................................ 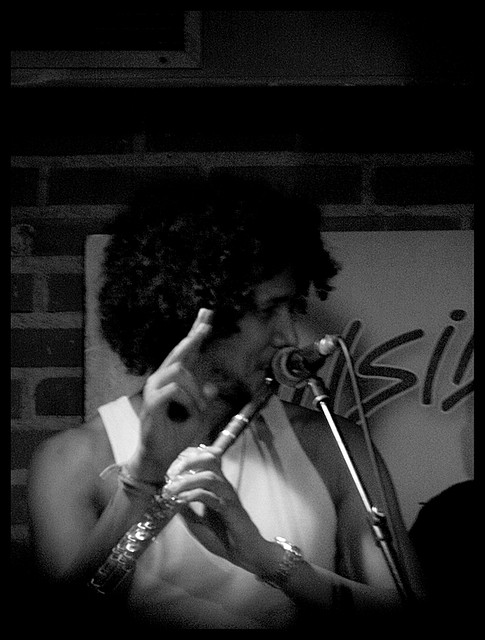 This music integrates so many influences seamlessly into one concept - North African, West African, bop, free jazz, classical, electronica and even Latin vamps. It's hard to see how all this should work together but Malik makes it work. In fact, it seems this IS Malik and therefore it works.
The arrangements are at times brilliant: just take the three bar Latin vamp (4/4-4/4-7/4) of Voleo that in and of itself would be great but serves as basis for Miles' Oleo which is played in 4/4 and therefore keeps on shifting on the vamp. Awesome effect: the repeats of the Oleo excerpt never sound quite the same and get completely integrated into the vamp. Very smart!
Malik's flute playing is fantastic! It's rare to hear a flute player in jazz who's actually good, but Malik is beyond good. He improvises with abandon, using angular altered lines (people like Rosenwinkl would be proud), free flurries, impeccable rhythm in any context (bop, rock/electronica, African, Latin...) and quite an edgy arsenal of classical quotes (a Bach phrase here and there, sometimes modulated to great effect). His tone on the flute is full and brilliant, unlike that of so many jazz flutists who are actually sax players and double up on the flute, usually to very little effect.... The spectacular singing technique is a show stopper.
The "orchestra" is great as well. There is an absolutely beautiful keyboard solo on one of these tunes (don't remember which at the moment), melodic and heart-wrenching. The grooves are super tight, drumming and percussion are standout (albeit the drumming at times gets a bit overpowering), the sax plays some great solos...
Most of the music is pretty high-powered and extroverted. There are a few moments of introspection (like the gorgeous low register flute playing at the outset of Pandemonium), but more of this to contrast the general high-decibel and upper register playing and arrangements would have made the disc even more subtle and beautiful.
Still, a must have

I can only agree with the above
a must listen indeed