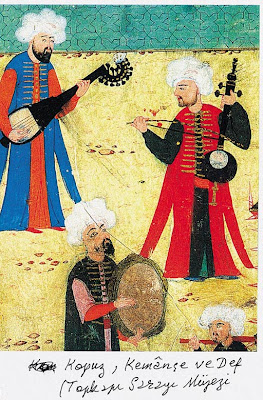 OTTOMAN MUSIC AND ITS INSTRUMENTS

Music occupied a very important place in Ottoman society. Topkapi Palace was a virtual conservatory, where both women and men received intensive training in music. Every concubine mastered an instrument while also being instructed in singing and dancing. Indeed, there were concubines who learned to play the trumpet, usually considered a man’s instrument. The men, on the other hand, received their musical training in the Enderun, which was the palace school. Albertus Bobovius, for example, a Pole who entered this school while still young and spent twenty years there, contributed a great deal to Turkish music. Bobovius, who in Turkey took the name Ali Ufkî Bey and was an interpreter and translator at court, transcribed 544 works of Turkish music into European notation. It is thanks to this effort that these pieces can be played today.
In order to grasp the importance which music had for the Ottomans, and the place it occupied in their culture, one must understand its three functions: Concert music, music for accompaniment, and visual impact.

Concert music, whether at the palace or elsewhere, was simply to be listened to. Among the Ottomans, concerts were performed both indoors and outdoors. A picture the original of which is in the Warsaw University Library depicts twelve Ottoman musicians giving a concert at the British Embassy on February 22, 1779. The instruments employed were three neys, a violin, a ‘kemânçe’, a ‘santur’ (the Turkish dulcimer), three tambourines, one ‘miskal’ (a multi-reeded wind instrument), and two ‘tanburs’. We have many miniatures and paintings which show female instrumentalists and concerts given among women. One such work is an 18th-century miniature now in the Philadelphia Free Library. In it, four female musicians perform for a lady in the garden of a palace or mansion, while a servant serves the lady a drink. The instruments depicted in the miniature are the tambourine, kemânçe, tanbur and ‘kanun’.

Music for accompaniment, on the other hand, was highly important for the art dances performed sometimes by women and sometimes by men dressed as women. Here music and dance were so closely intertwined that we might call such performances “visual concerts.” Music functioned as accompaniment in other types of show as well. One can cite the performances of tumblers, acrobats, jugglers, magicians, jesters and wrestlers, as well as those by trained animals. A miniature depicting festivities held in 1582 has two acrobats, two dancers and four jesters accompanied by the music of a tambourine, miskal, çagane and kopuz.

Visual impact was the third major element in Ottoman music. The costumes of the instrumentalists, and the unusual or majestic aspect of some musicians, appealed to the eye as much as to the ear. The sultan’s processions included other performances besides music. In the middle of a miniature depicting a procession of Sultan Murad III we see this ruler on horseback, while in the lower part of the work there are two dancers and a jester accompanied by a stringed instrument, and in the rear a mounted ‘mehter’ band.
Music and dance also figured prominently in the processions of tradesmen, which lasted for hours. Ottoman ambassadors who had been posted to some country, say Vienna or Paris, would enter the city with a large procession which included a sizeable mehter band on horseback. So magnificent were the scenes that the public and the courtiers watching were deeply stirred. And the ranks of those who were moved also included composers. The tradesmen’s processions inspired such greats as Mozart, Haydn and Beethoven, in whose works this Ottoman music was reflected.

The fact that music appeared in the festivities simultaneously with other types of performance did cause one problem: when different kinds of music were played at the same time, they struck the ear all together, and there was no way to make a choice. There are numerous examples of this. Consider, for instance, the miniature which shows festivities held in 1582. A ‘köçek’, that is a male dancer dressed as a woman, does his stuff for thousands of spectators to the tune of his own music. Elsewhere a Mevlevi whirls in a religiously motivated dance called the ‘sema’, again accompanied by his own music. The public can watch the köçek’s dance and the sema separately, but how are they going to keep the two different kinds of music apart. The answer is very simple: Even if the clashing types of music turned into noise, the spectators, caught up in the exuberance of the festivity, just didn’t care. On the other hand, foreigners who witnessed the festivities and wrote about them in books and reports say the cacophony of hundreds of clashing instruments, and all those songs, did indeed disturb them. The reason was that they, as strangers, were unable to surrender themselves to the festive atmosphere.

There was a wealth of instruments in Ottoman days. In his book of travels, Evliya Çelebi describes a parade of all the guilds past Sultan Murad IV, giving a full list of instrumentalists, instrument makers and singers, and points out that there were some “hundred” names for instruments. Every instrument had its own name, even when they belonged to the same family. Some of the better-known stringed instruments were the kopuz, çeng, kemânçe, violin and lute, while the winds included the horn, ney, miskal and zurna. Prominent percussion instruments were the triangle, drum and ‘çagane’. Most of the Ottoman instruments have unfortunately not come down to our age, being lost in the mists of time. One reason is that during the 19th century growing Westernization led to the use of European instruments. Indeed, such once-popular instruments as the çeng and miskal have vanished completely, not a single example being left even in the museums. But luckily we have drawings in miniatures and old books on music. 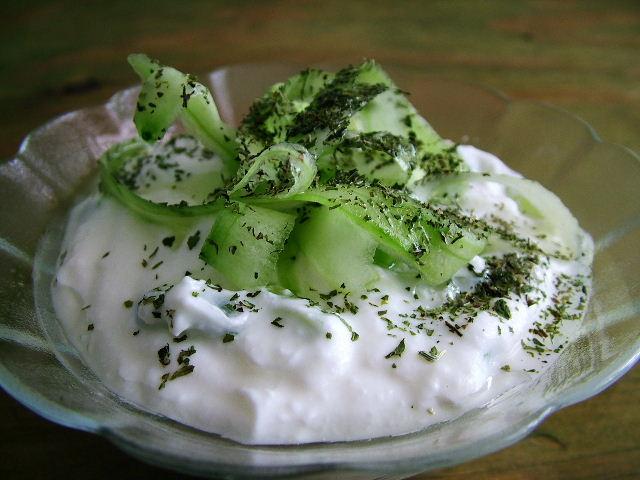 A dish that is to be accompanied by yogurt is a must on any traditional Turkish table - unless of course, there is already another dish whose main ingredient is yogurt. For thousands of years, yogurt has been an indispensable element on Turkish tables. It is consumed plain or as a side dish, and it is a crucial part of Turkish Cuisine. Yogurt is used to make soups, sweets, and the favorite drink ayran, which is made by mixing in water, mineral water and salt. Another reason why Turks hold yogurt dearly is that all over the world it is consumed and known as “yogurt,” which is a word of Turkish origin.

About a thousand years ago, Turks were the first to make Yogurt. The oldest known lexicon of the Turkish language, Kasgarli Mahmut’s Divân-i Lûgat’i Türk has an entry for the same word, and it has the same meaning. At the time, Turks still led nomadic lives and had devised numerous methods to preserve their food for their long journeys. This is one of the reasons why milk was made into yogurt. The best quality yogurt is produced through the fermentation of cow and lamb’s milk. It is not surprising that dairy products made from these animals are Turkish inventions; Central Asian Turks were the first to domesticate lambs and cows. As it was first spreading into Europe and elsewhere, this thick, white dairy product was used for therapeutic purposes; in the 20th century, its daily use spreads all around the world.

The transformation of milk into yogurt is the feat of lactic acid-yielding microorganisms. Yogurt is basically coagulated milk produced by the partial transformation of milk lactose into lactic acid through the effect of yogurt yeast. The initial production step is to boil the milk. The boiled milk is left to cool until it won’t burn your finger and then two teaspoons of starter yogurt added gently from the edge of the container. The container is then sealed and usually placed in a nest of towels to keep the milk warm and the fermentation going. Fermentation takes 4 to 5 hours at a temperature of approximately 37 degrees.

Yogurt can be classified under three groups depending on the production method; in addition to the regular yogurt whose production has been outlined above, there is also the Silivri Yogurt and strained yogurt. Silivri style yogurt is proper to the Istanbul region, and it is produced with lamb’s milk only. This is a tasty, firm and very creamy variety of yogurt. The procedure involves first boiling the milk in large cauldrons. Then the milk is poured into containers in a way to develop froth. Blazing coals are placed under these containers, and the yogurt is left to sit. Consequently, a harder and slightly cooked creamy top is obtained. When the containers are cool enough, glass syringes are used to inject yogurt yeast to the mixture from all four corners. Following this procedure, the containers are sealed with large wooden covers. After settling for 4 to 5 hours, the Silivri yogurt is then ready for consumption. The same initial procedures are followed to produce strained yogurt, however the creamy top is later removed and the remaining yogurt is placed in finely woven cloth bags. The bags are then hung at a height to allow the liquid to strain off. Finally, the strained yogurt is transferred to tin containers. Strained yogurt contains no vitamin B, since this ingredient is moved out along with the liquid as it is strained off.

It would be almost impossible to find a Turkish household that does not have yogurt in the refrigerator. Turks, who use yogurt widely, believe that it is a health food, with ability to cleanse the body from toxins and poisons. Even dreaming of yogurt is considered a good omen as a sign of upcoming wealth and a long life.